Today, the river is a wilderness and canoeing nirvana and a provincial waterway park that was designated a Canadian heritage river in 2004 . While undoubtedly canoeing is one of the premier attractions and activities of the park like most other northern Ontario parks it is also a world class fishing destination and anglers that do make the journey will enjoy an experience of a lifetime. Camping and wildlife viewing are two of the other prime activities that the park has to offer while for others it is the chance to view some of the aboriginal pictographs on display particularly at Fairy Point on Missinaibi Lake. 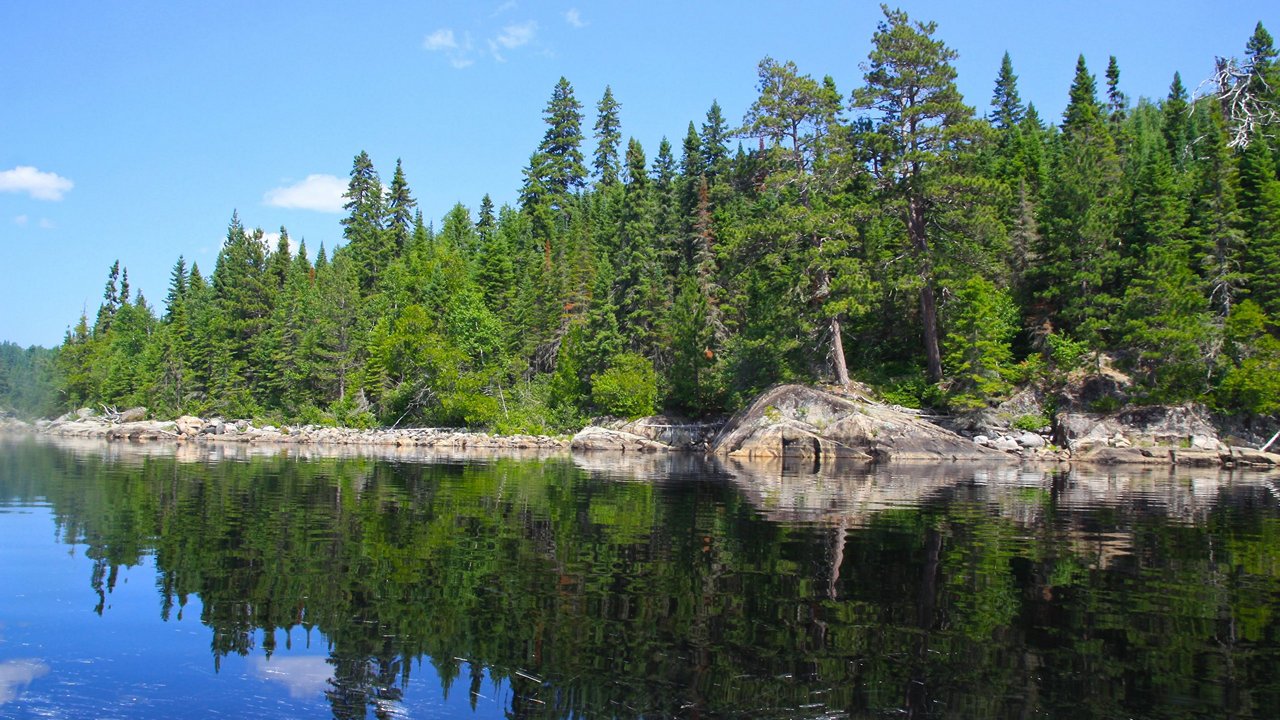 How to get to Missinaibi Provincial Park:

The park itself begins approximately 80 kilometres (48 milesa) north of the Town of Chapleau about 10 hours north of Toronto on an access road but there are two main access points depending upon which activity or part of the park you wish to visit. One near Chapleau and the other near the Town of Mattice.

Please note that the park itself is very remote and is crossed at only 4 points by either road or rail.

Please note that for the Chapleau access you will be traveling on remote roads so a GPS is recommended.

From Southern Ontario to Mattice access:
Take Highway 401 East or West depending upon where your starting point is.
Take Highway 400 North until it merges with Highway# 11 North towards North Bay.
Continue on Highway #11 into Mattice.

By Bus: Public bus will take you to or Mattice.

The existing CN and CP railroads continue to provide access to Chapleau. This will be the closest you can get by rail, from there you must rent a car to complete the journey.

There is no direct air service into the Missinaibi Provincial Park area but there is regular scheduled air service from Toronto to Kapuskasing. From there you can take public bus service to Mattice to begin your journey into the park. There are also many local outfitters that do provide fly-in service to numerous lakes in the region. The pages of this website will provide further information. 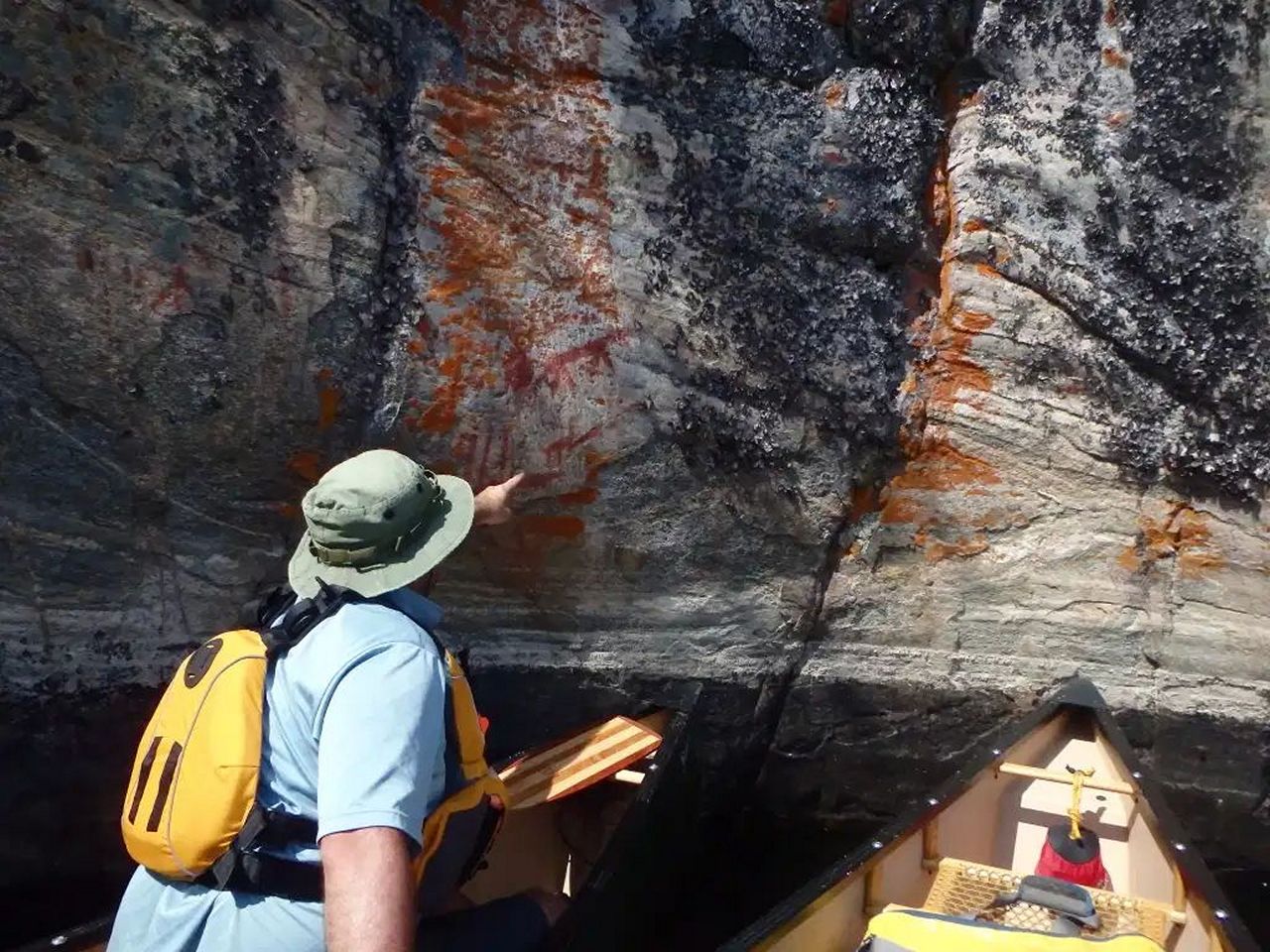 Without a doubt canoeing and kayaking are the number one reason most people visit Missinaibi Provincial Park. The whitewater is world famous and challenging for even the most experienced paddlers. Careful planning and preparation must be undertaken before beginning any journey, as the river is very remote and undeveloped and it is highly recommended that only very experienced paddlers undertake the course. An excellent level of fitness is also required as portages are frequent and can be very difficult.
While some canoeists have completed the entire month long 550-kilometre (330 mile) journey most will complete only a portion of the route depending upon the starting point.
Please note that if you do plan to canoe a portion of the Missinaibi River you will need a provincial park permit, services are non-existent and there are limited camping spots. It is also recommended that river water levels should be confirmed as low levels make portions of the river impassable.

The two most popular canoe routes are:

1) Missinaibi River Route from the hamlet of Missinabie just outside the park to the township of Mattice 238 kilometres (144 miles) away.
This route takes you through the large Missinaibi Lake passing by the Fairy Point pictographs, Whitefish Falls and past the remnants of a Hudson’s Bay Company trading post.
There are a number of portages around whitewater rapids (more experienced paddlers may attempt to run these) as you pass the mouth of the Hay River and through Peterbell Marsh.
Between Peterbell and Mattice there is a series of 30 rapids that can either be portaged or run depending on your experience and the water levels including Split Rock Falls, Albany Rapids, Beaver Rapids and Shaprock Falls.
There are limited camping facilities along this route, up to 27 portages and will take anywhere from 7 – 9 days to complete. Summer is the best time to undertake this challenging whitewater route. 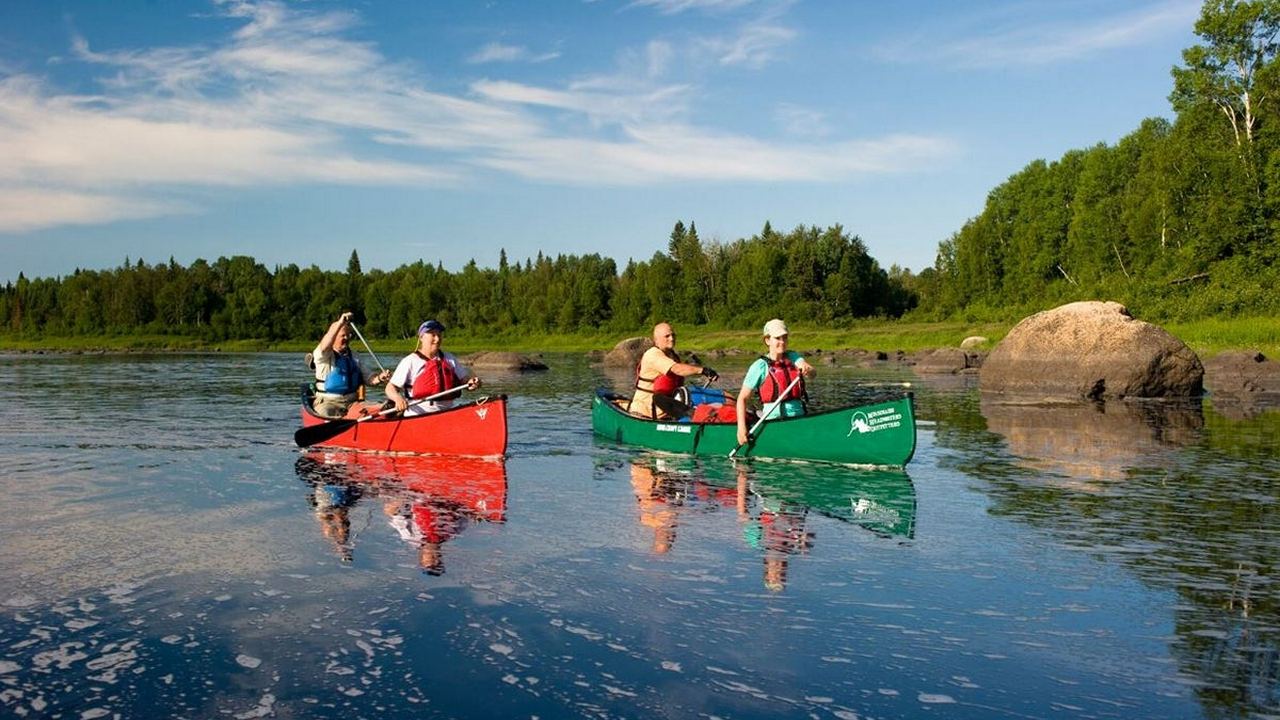 2) Mattice to Moosonee, a 316 kilometer (190 miles) journey that will take you to the edges of the near arctic at James Bay.
As you leave the Township of Mattice you will immediately be set upon a series of rapids including Rock Island Rapids and Black Feather Rapids and a portage around Kettle Falls. This is an extremely picturesque portion of the Missinaibi River.
You will then encounter a long string of rapids that are usually fairly easily navigable after you have passed Alice Island until you reach Thunderhouse Falls where violent rapids connect a series of small waterfalls and the river drops over 40 meters (132 feet) in 3 distinct drops. This marks the starting point of the Missinibi River’s descent from the Canadian Shield highlands to the lowlands of James Bay. You then pass the site of an old Hudson’s Bay Company trading post and between some steep granite cliffs.

As you pass the mouth of the Soweska River the river widens and is joined by the Mattagami River to form the Moose River. You then pass a railway bridge and a small aboriginal settlement aptly called Moose River Crossing where you can end your journey to catch the Ontario Northland train.
If you wish to continue your adventure it is another 72 kilometres (43.5 miles) to the town of Moosonee into the estuary where the Moose River meets James Bay. The Polar Bear Express provides railway service back to Cochrane and thus the rest of Ontario.
There are limited or no camping facilities along this route and the entire journey includes 7 portages and should take 7 – 9 days to complete. 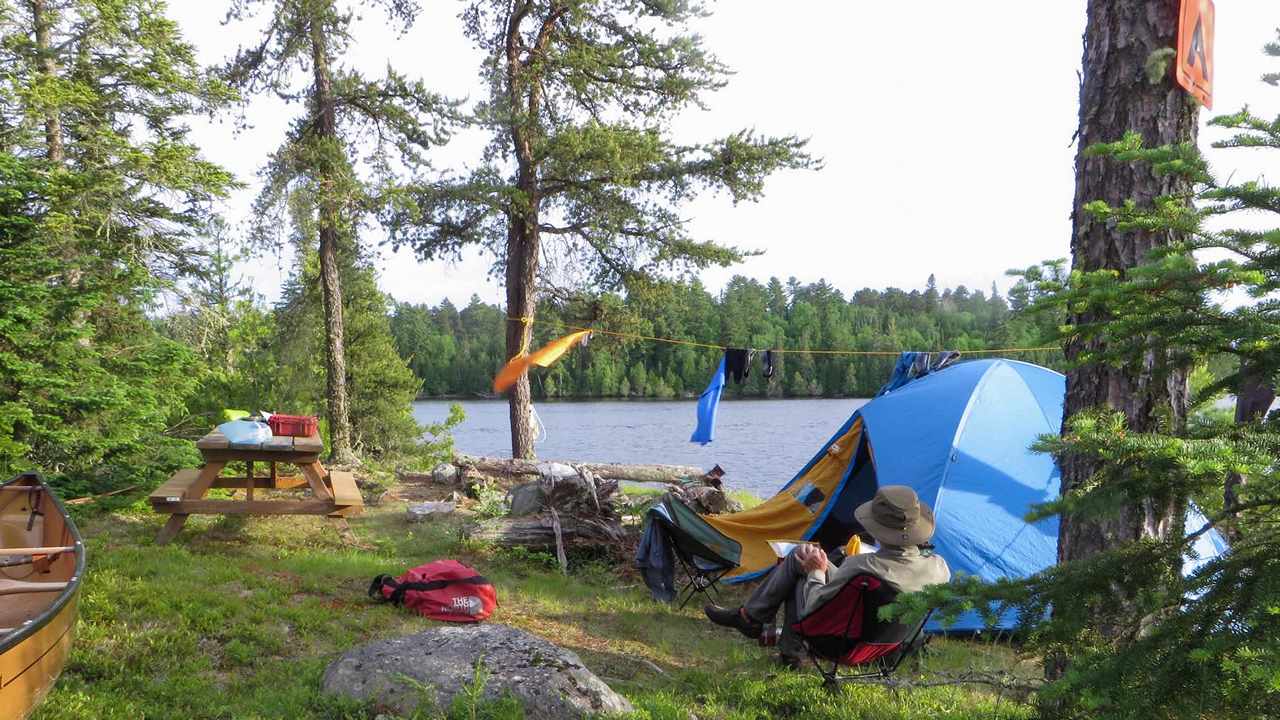 Missinaibi Provincial Park has limited camping facilities for a park of its size as in addition to being a waterway park it is also a wilderness park.
There are 36 campsites along the shores of Barclay Bay at the southern end of the park on Missinaibi Lake that are fully serviced with facilities and running water. The campsites are also near a boat launch and there are boat and canoe rentals available on site during the busy summer months.
Along the course of the river there are 103 backcountry campsites for paddlers to utilize during their adventure. There are no facilities or services offered at these sites.
Please note that all campsites are only open during the busy summer months from early May to late September and permits are required to camp along the Missinaibi River.
Please note that non-residents utilizing a licensed tourist outfitter can be exempt from paying Crown Land Camping Permits. 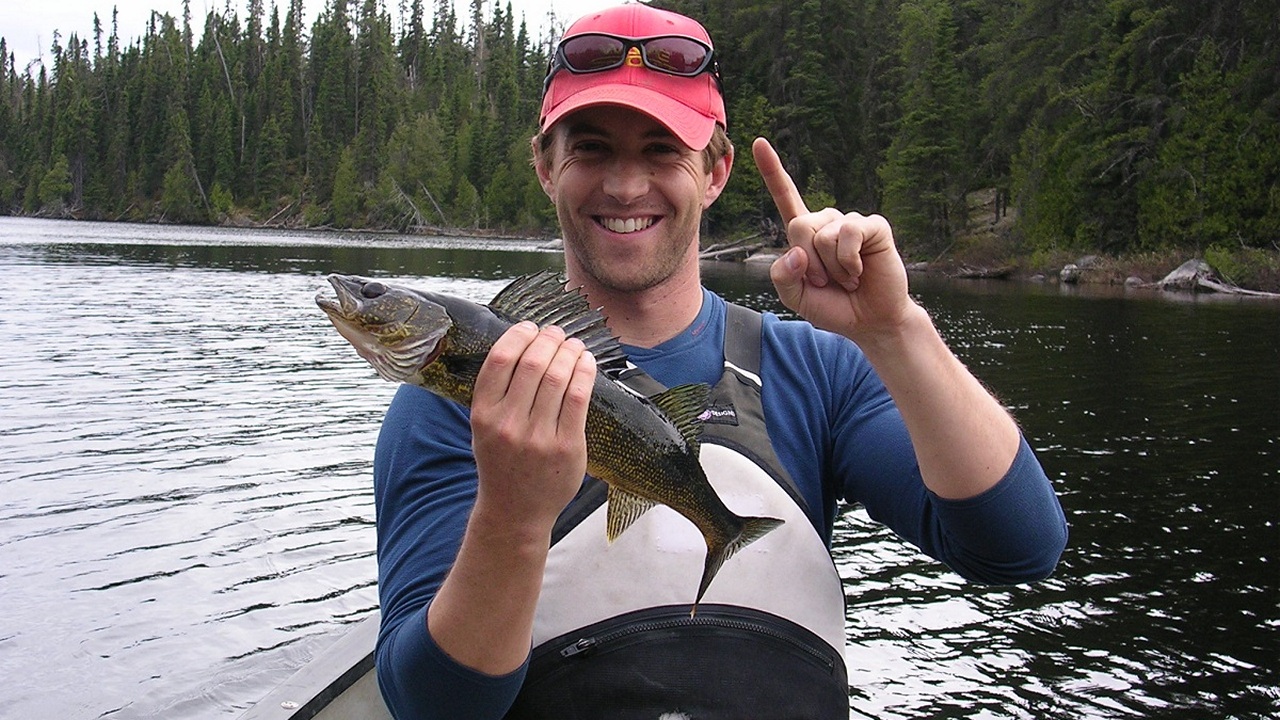 Next to canoeing and/or kayaking this is the most popular activity undertaken by visitors to the park. As with most northern bodies of water fishing is spectacular and the waters of the Missinaibi Provincial Park are no exception. Fish are so plentiful that even the most inexperienced angler should have no difficulty in landing a meal or two and will always have the potential of landing a trophy fish.

Some of the species found in the waterways include:

Northern Pike, Walleye, Yellow Perch, Smallmouth, Bass Splake, Sturgeon, Lake Trout, Whitefish.
Northern Pike (to some the most delicious game fish there is) are so plentiful and easily caught that there are no limits on the number landed and there is a year round open season.

Boating:
There is a boat launch at the southern end of the park and motorboats are allowed on Brunswick, Little Missinaibi and Missinaibi lakes.

Hiking:
Missinaibi Provincial Park is a wilderness park and hiking is not a prime activity but there is one well-marked hiking trail. The Borasso Logging Camp Trail is 6 kilometres (3.6 miles) long and passes through some rugged Canadian Shield terrain and will take most hikers up to 2.5 hours to complete. The trail is accessible by boat.

Wildlife Viewing:
As this is northern Ontario wildlife is plentiful and Missinaibi Provincial Park offers some excellent wildlife viewing opportunities and some of its southern portions lie within the Chapleau Game Preserve (the world’s largest game reserve). 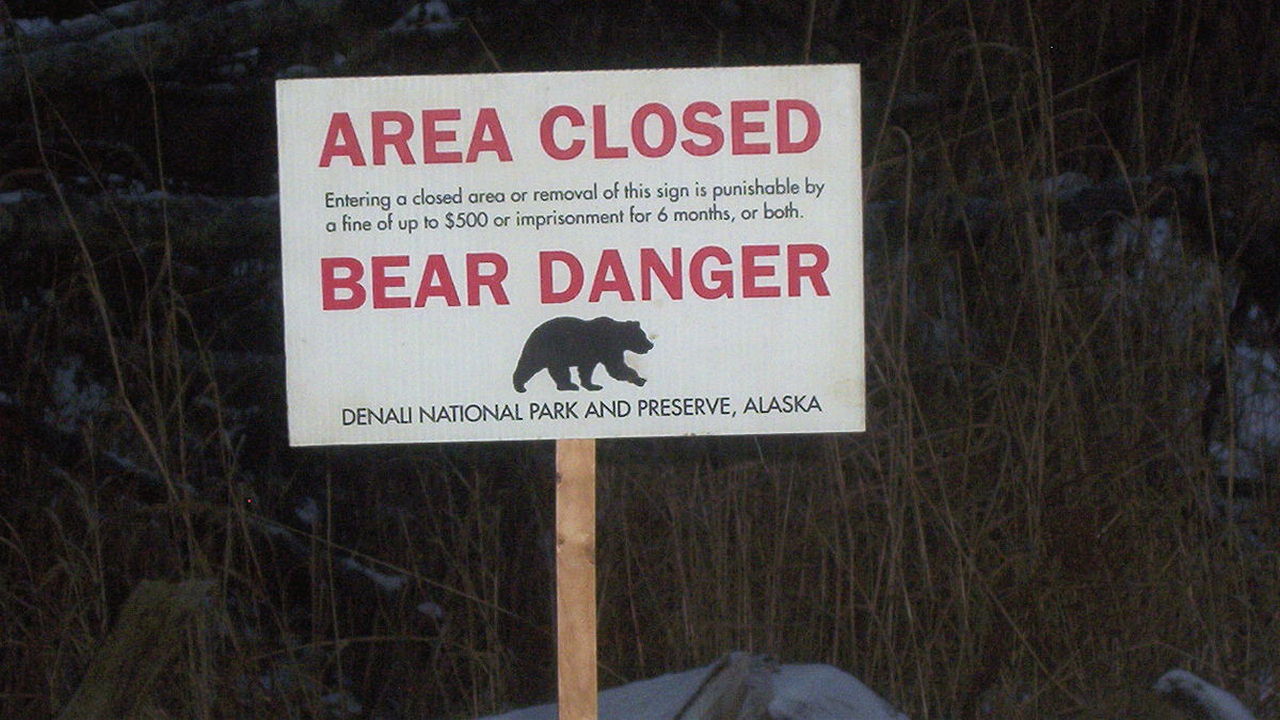 Hunting:
Limited in season hunting opportunities exist in MIssinaibi Provincial Park for those that get the required permits. Contact the park through Ontario Parks or the Ministry of Natural Resources.

Heritage Sightseeing and Aboriginal pictographs:
missinaibi pictographsThe Missinaibi River is a historic fur-trading route and aboriginal peoples have inhabited the area for thousands of years. Missinaibi Provincial Park has many aboriginal rock paintings including the most famous of all: those that cover the rock face at Fairy Point in Missinaibi Lake depicting the mythical Mishipizhiw (also known as Mishipizheu or Gitche-anahmi-bezheu).
Known as the “Spirit of the Water” this fearsome shape-shifting animal was both feared and revered by various native cultures. Designed to be viewed from the water the red coloured images at Fairy Point also depict images of fish, caribou and canoes and cover a 35-meter (110 feet) area of sheer granite cliff face facing the setting sun allowing them to be naturally illuminated each day at nightfall.
In addition to the pictographs there are also the remnants of a number of historic Hudson’s Bay Company trading posts along the route in addition to the present day remnant of an originally founded company settlement at Moose Factory, the first English settlement in Ontario.

Missinaibi river thunderhouse fallsA trip to Missinaibi Provincial Park is not everyone’s cup of tea and appeals mainly to wilderness adventurers as facilities are almost non-existent. For those that do wish to partake in these types of activities it is probably an adventure they have dreamed of for quite some time as the waters of the Missinaibi River are some of the most sought after by whitewater enthusiasts worldwide.

The wild, majestic Missinaibi River is one of the longest undeveloped and unspoiled free-flowing waterways in Ontario. This is not a river however for inexperienced paddlers and wilderness adventurers. The route is challenging and must be traversed with extreme caution and visitors must be well prepared for any eventuality, as the whitewater can be treacherous and extremely dangerous in numerous locations. The use of a local guide or outfitter is highly recommended to minimize risks.

For whitewater enthusiasts the raw beauty of Missinaibi Provincial Park and the Missinaibi River represents the ultimate outdoor adventure and challenge.